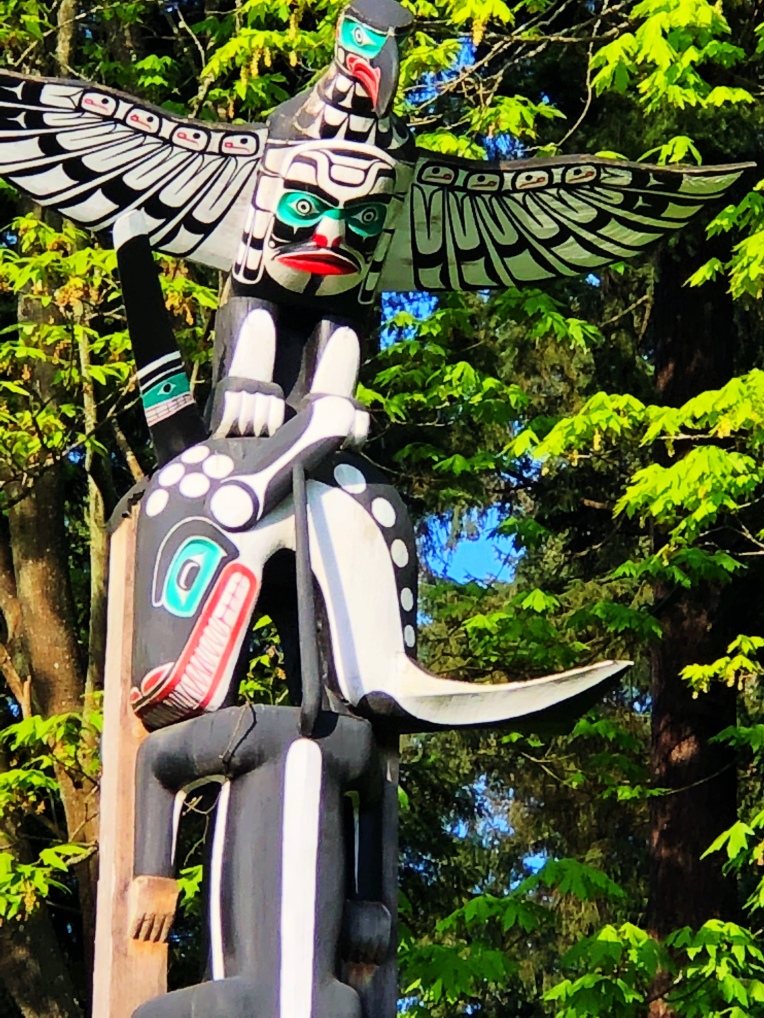 One of my photography goals this year was to work on a project that documented totem poles. I didn’t have any reason for this other than I am fascinated with First Nations art and having a project to work on keeps my brain and body active. It encourages me to explore parts of my city or country that I hadn’t been to before.

I had to do some research on where to find them. I knew about two in Edmonton, and one of those was removed from CFRN. So that left one, the totem pole at Government House. 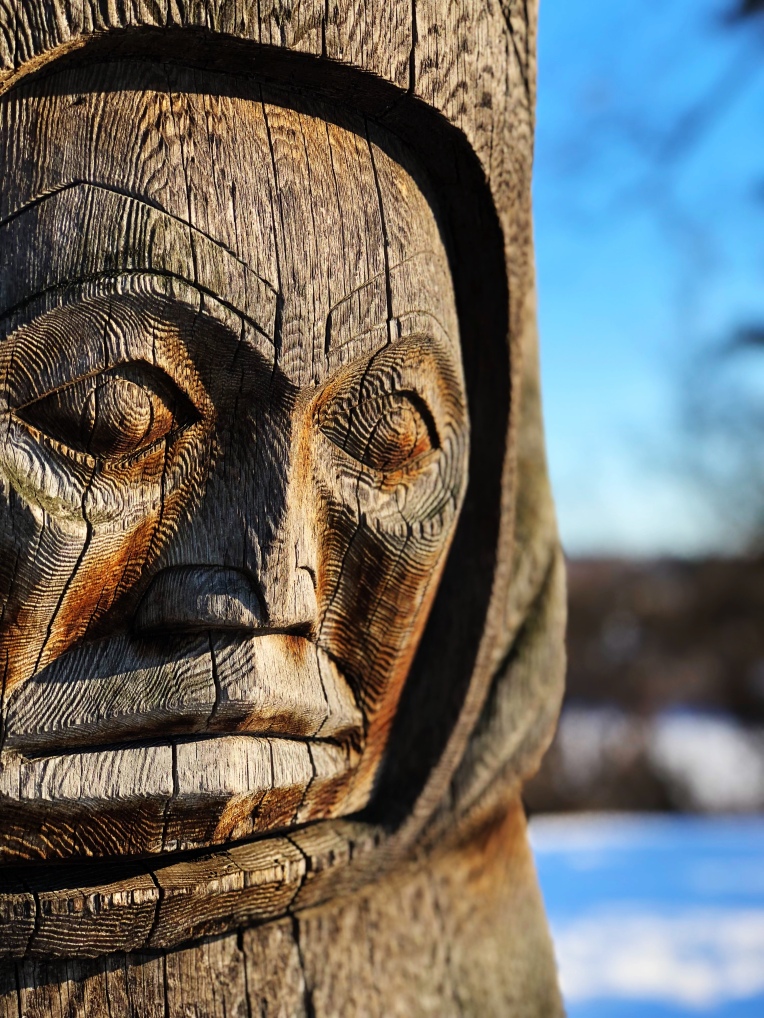 I had seen it in passing so I was aware of it. I learned the CRFN Sunwapta pole was restored and will be apart of the new Royal Alberta Museum when it opens (it could be a rumour, but I have a reliable source). I was surprised to learn there was a totem pole on the grounds of the Alberta Legislature. 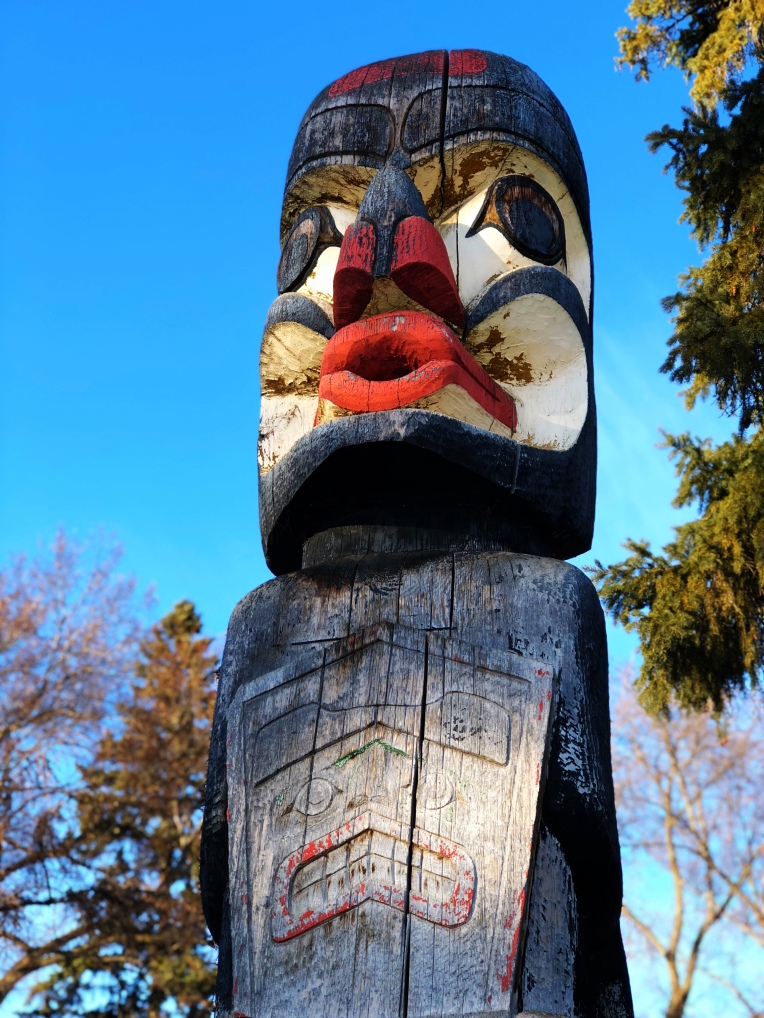 I went there all the time and wasn’t aware of it. Captain and I trudged through the snow to see it. It is 50 years old and is ageing well. I suspect the Province will take it down as it becomes more decrepit rather than let it die a natural death or even restore it. I went to the Stollery children’s hospital to do some research for a piece I am writing and discovered the Totem Pole there! 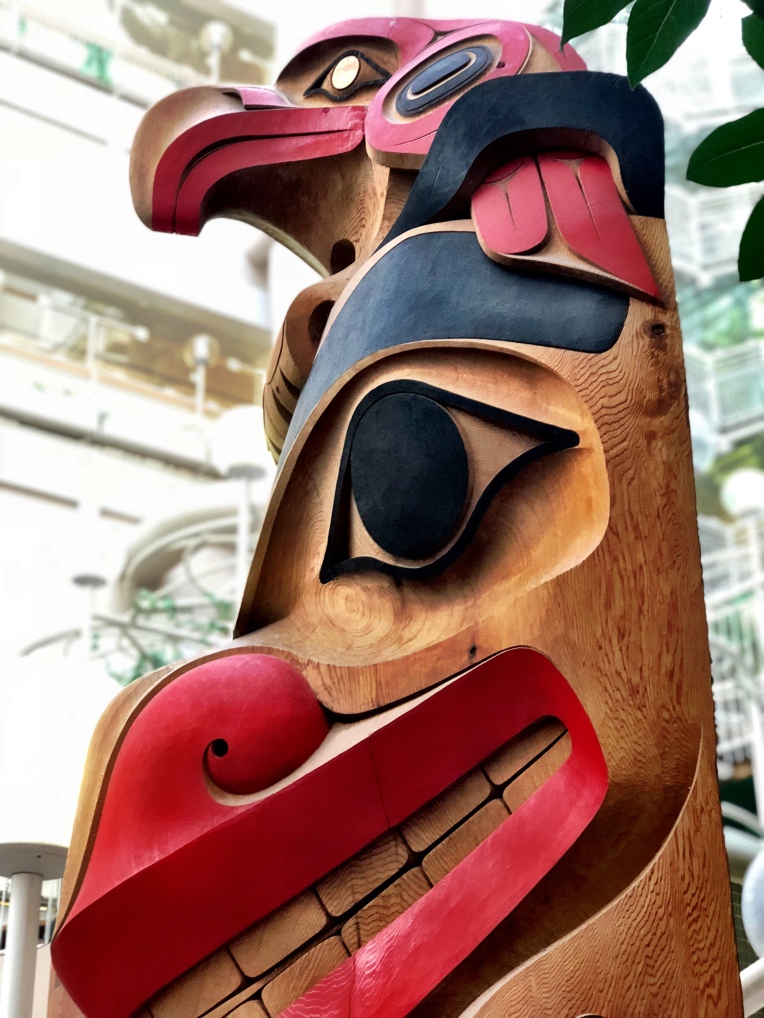 It was covered in butterflies and was beautiful. It will live a long and healthy life by being placed indoors. On that same trip, I went to the healing garden in the Mazankowski Hospital. A pole is placed there only it isn’t First Nations, but rather from India. It also was beautiful and not technically what I was looking for, I photographed it because it was beautiful. 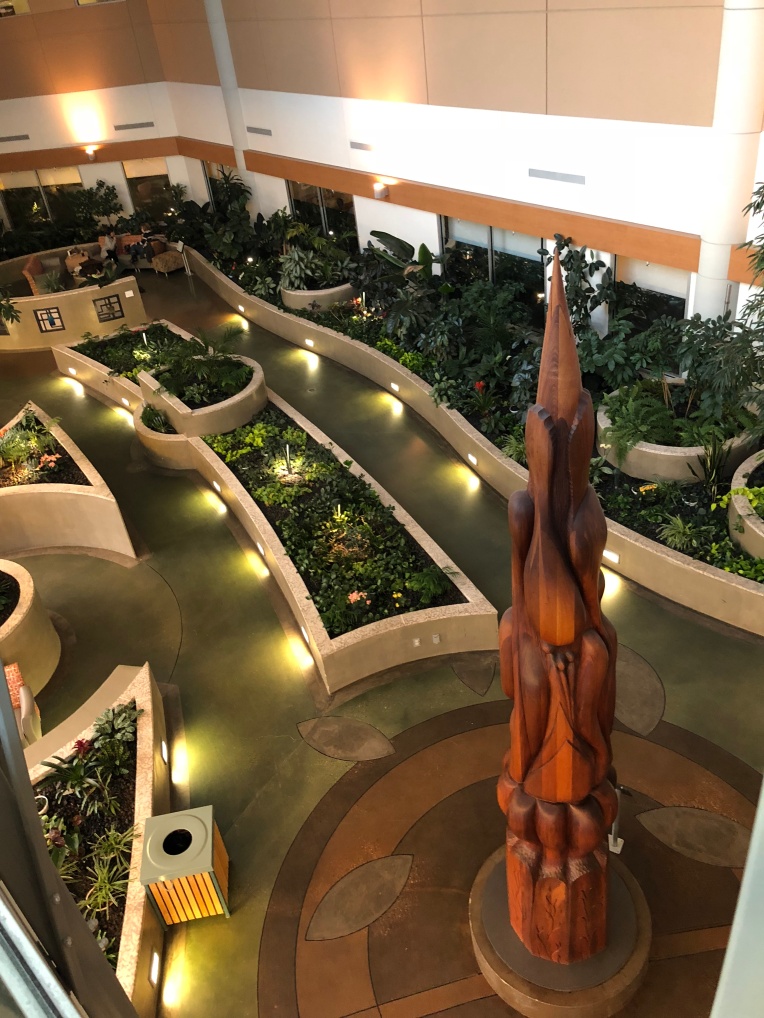 The last pole I found in Edmonton was the mighty Thunderbird located at the home of the Thunderbird’s, Ross Shepherd High School. I realized I was also aware of this guy but never entered it into my consciousness. 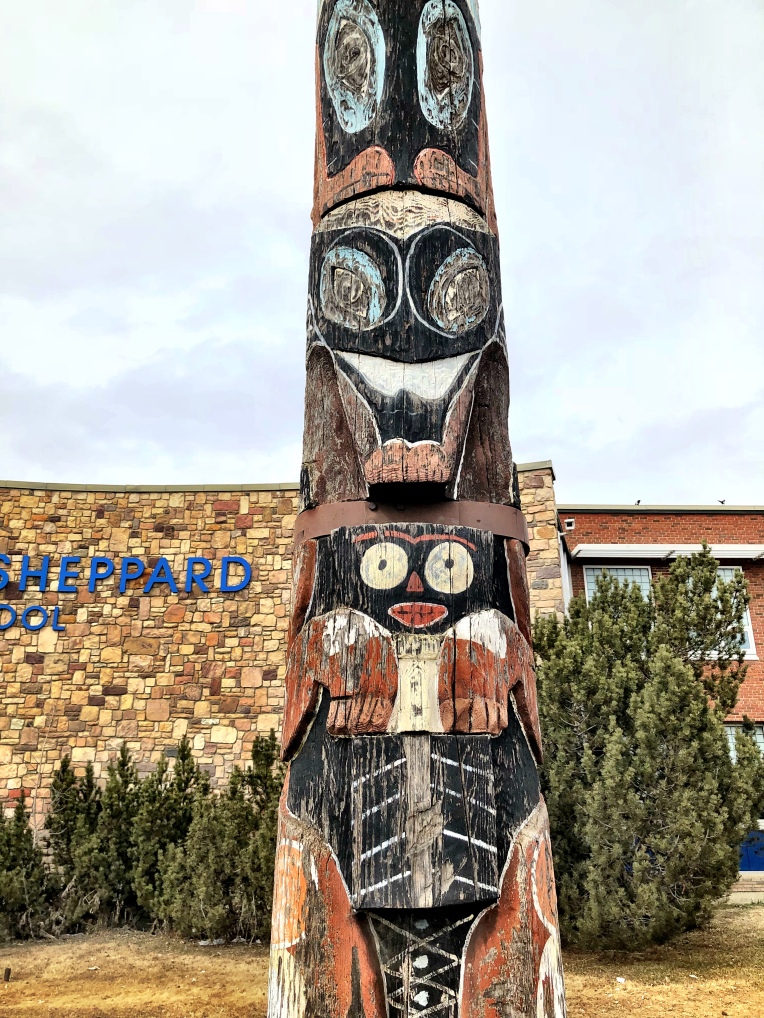 It is located next to Coronation Pool and the Telus World of Science, so I often drive by it, but as with so many things, you see things but never notice them. This is why I like working on these projects. I want to notice everything and not just see them in passing.

My travels in the spring took me to the west coast. This part of the country is filled with totem poles. I visited the Squamish Lil’wat Cultural Centre and learned why First Nation’s art is so prolific on the west coast. It was logically explained to me. When the ocean tide rolls out, the ground is laid out in a banquet of seafood. More than you could possibly eat in a day. When food is there and not needing to be worked for, there is time and energy to be creative. This is why the art is plentiful. It was a beautiful concept. I learned the history of the poles and why they are rarely restored and often left to die where they stand. It isn’t from neglect, it is because the tree has a spirit and it lends itself to the carving. Out of respect and thanks, it is left to live out its natural life and die when it is ready. 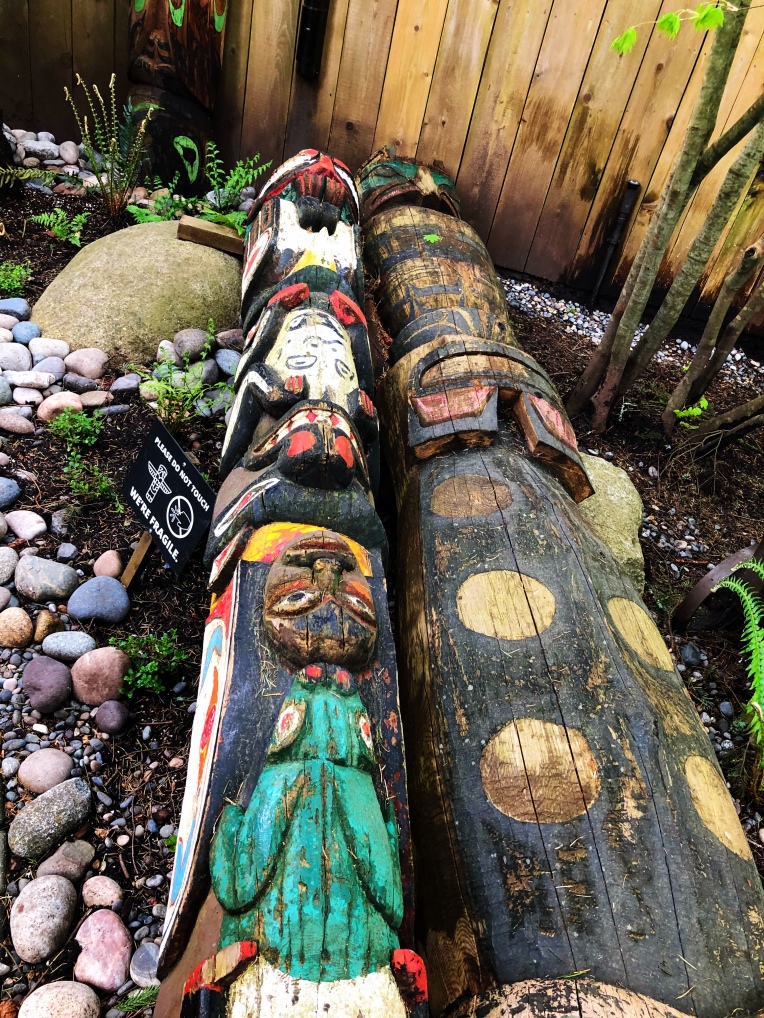 I imagine some poles have been reclaimed by the land throughout the forests and they lay there becoming homes for plants and small critters.

We explored the Museum of Anthropology at University of British Columbia, 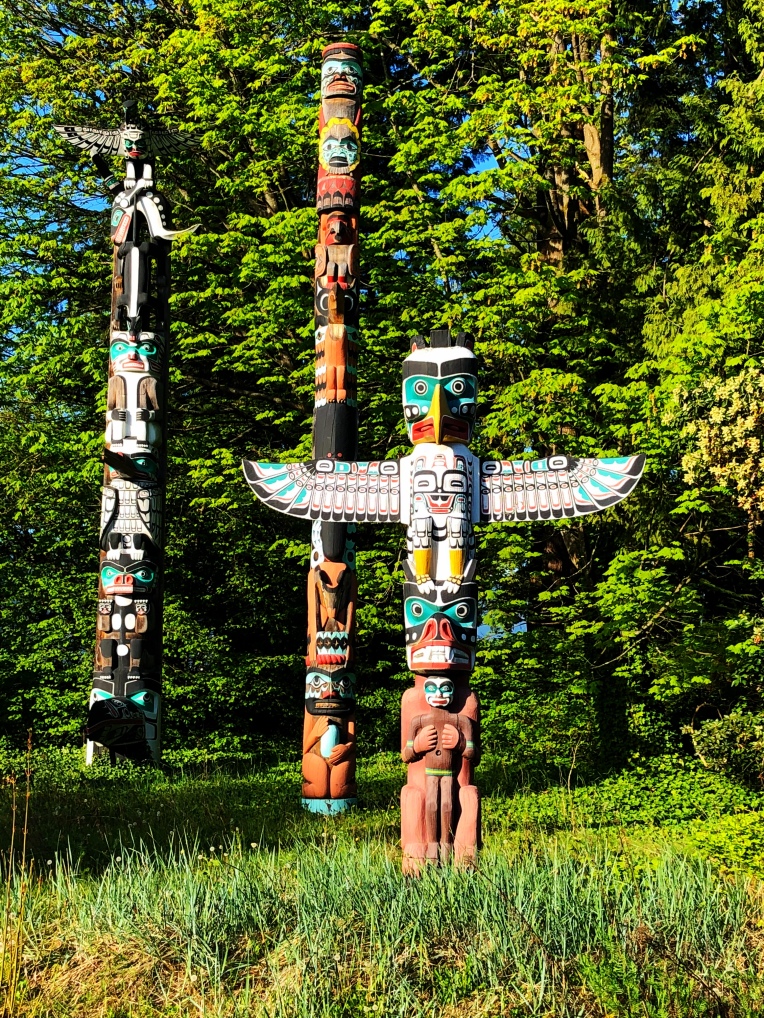 saw the totems at Brockton Point in Stanley Park, 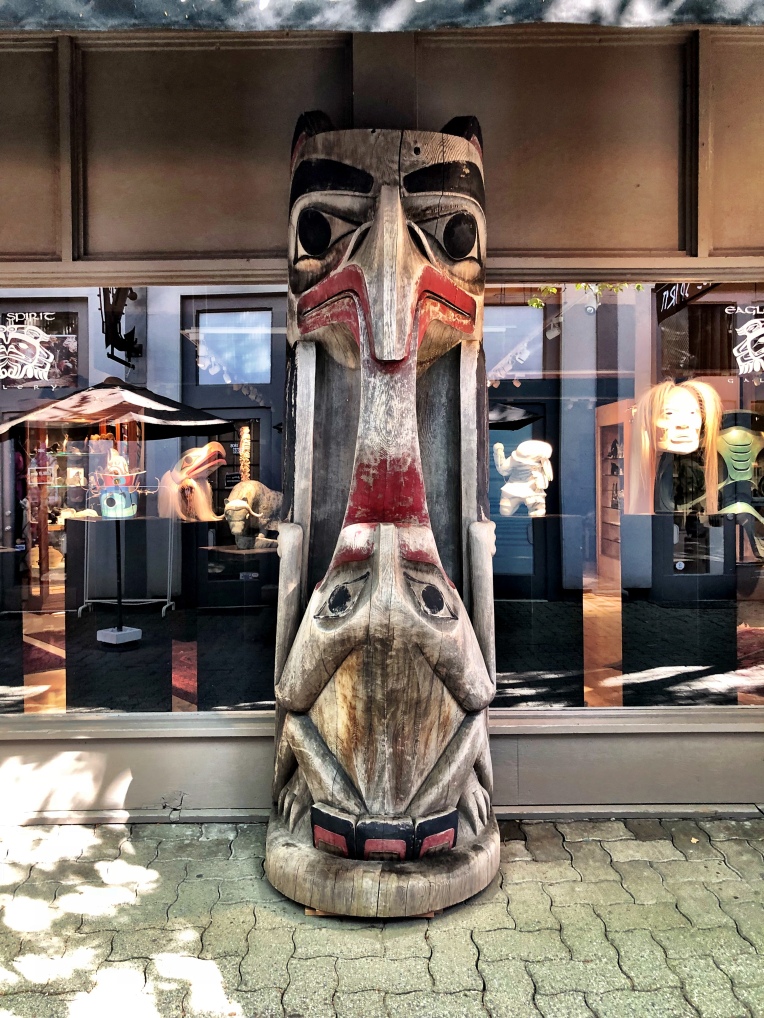 stumbled onto one on Granville Island, 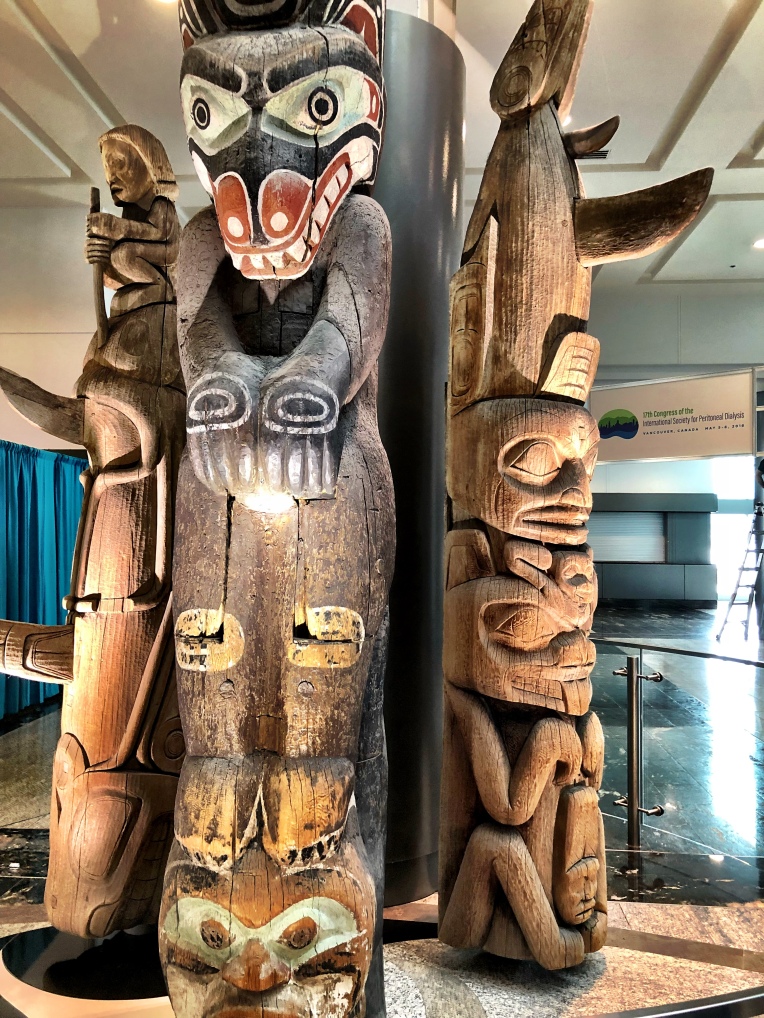 and looked at Capilano Suspension bridge’s extensive private collection. We drove the Sea to Sky Highway and found more along the way and in Whistler. 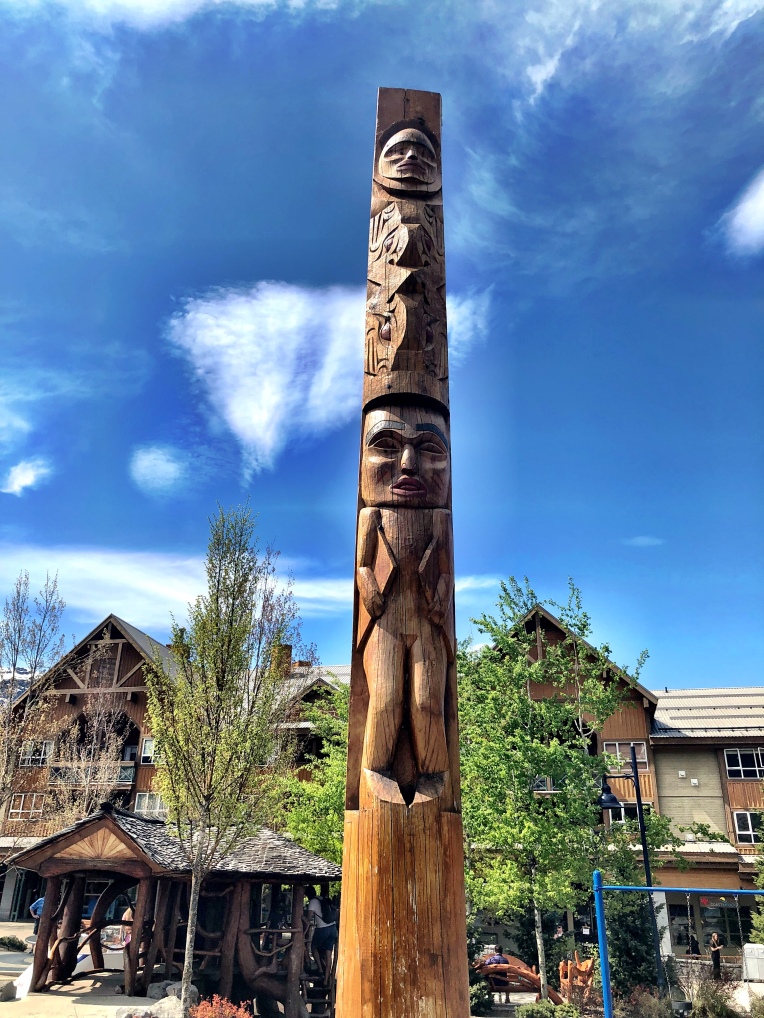 Welcome Poles were placed around the village, and then we found one at the Cultural Centre. 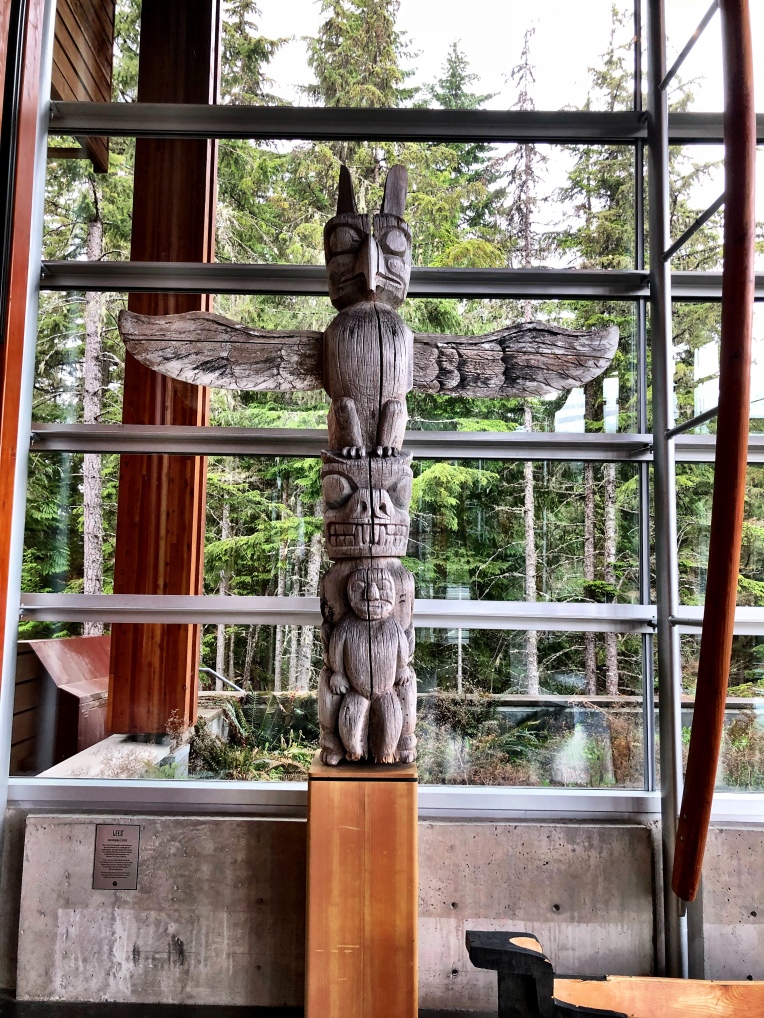 I decided I have favourites. The ones I am attracted to poles that are without paint. The beauty of the wood on its own was enough for me. As someone who has an irrational fear of birds, the irony of being drawn to Raven is not lost on me. I purchased Raven art and a bookmark to keep him with me.
My entire project can be found here or over on Instagram by searching #totemproject. 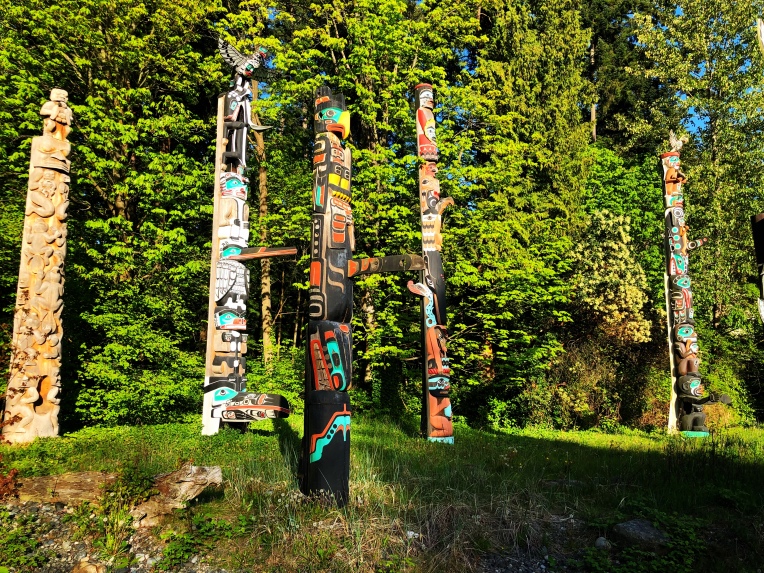 One of those perfect days
These three prints are by local artist @allanmilneart not only are the images beautiful (Three Sisters, Castle and Rundle), they bring me great joy and happiness. I’m a better person with colour in my life. I highly recommend Allan’s work. He is talented and a wonderful human. Please consider checking out his work for you next art purchase! Thanks Allan, I love them and they are in a good home 😍
Back from a few days in Lethbridge. I always forget how pretty the coulees are.
It was so so so good to be back at the Fringe! My first one was 1988. It’s changed a lot, the gazebo isn’t the main stage anymore- there’s a actual stage now. The vibe is the same and people are still doing their thing and embracing the weird. I saw a half woman half big horn sheep today and a zombie bride. I ate green onion cakes and sat in the beer tent for the first time in my life. Keep doing new things. Saw three plays so far, Crisp Trepidation and the Musical for the Endtimes both are well worth your time and super fun shows. Crisp Trepidation is better but I might be biased. Link in bio for tickets. The other one was the weirdest show I’ve seen since 1988. I don’t recommend that one. Fringe on friends 9 days left! @musicalfortheendtimes @thecampfireanthology #crisptrepidation
Tickets go on sale at noon today online @edmontonfringe I’ll be there opening night, come say hi! Meet OJ @ojthegoldfish @thecampfireanthology @kate.couture
At @yegartwalk today. This mural doesn’t get old.
Big water in the creek.