A friend of mine tagged me in a post on facebook today because it reminded her of me.

“You could read in these pages about explorers who go to the deepest, coldest, highest places on Earth and beyond, but the truth is that exploration is as near as your backyard – and it can be profoundly life affirming.” (Chris Johns, Editor, National Geographic Magazine, in the 125th Anniversary Edition, January 2013).

I am one of those lucky girls who lives a couple of hours from a world class vacation destination. The kind of place where Europeans save up for their entire life to make a trip to. The kind of place Japanese tourists can’t wait to visit. Yet I don’t go very often. Why is that?

Sometime before Christmas, I had a feeling or desire to drive to the Rockies for the day. I live close enough that a day trip to Jasper is not unreasonable. Something in the back of my head always whispers to me “that is unreasonable, you need to stay home. Moms don’t up and leave their home town for a day.” Um… really? I bet lots of moms do. I told that voice to shut it and asked my kidlets if they wanted to go with with me. I was perfectly happy going by myself.

My son loves the Mountains as much as I do. There is something about the energy that is invigorating. I always feel re-charged when I go. My son feels the same way. My daughter on the other hand, prefers the flat lands of the prairies. However, Santa bought her a new camera and she knew she could get some beautiful shots in Jasper National Park. ChatterBox agreed to join us. They asked the night before how early they had to be up. I wanted to leave the house by 7:30. Hard for a couple of teenagers on vacation. They are use to sleeping in until noon-ish. They both were perfectly agreeable and were up long before I was.

We left early, not so bright because it is Canada on the prairies and its dark until 8:30. Filled the car with gas, snacks and water then proceeded to Starbucks. We needed coffee. We were out of the city by 8:00. By the time we were fully ensconced on Highway 16 West, the sky was pink with the beginnings of a sunrise. It was beautiful in spite of it being to our backs. By this point I turned on some podcasts to listen to. Stuart McLean and his tales of Dave’s family from the Vinyl Cafe were new to my kids. We laughed all the way to Edson. This is where the boy had a turn to choose what we listen to. On came theme music for road trips. His own personal sections of appropriate travel music. We sang along to Arrogant Worms, Portal 1 and 2 as well as had to guess what epic overture was playing. My kid has a thing for epic scores.

Me – “Clash of the Light Sabers? Escape from Cloud City?”

The Boy – “No, Dumbledore’s death theme.”

I was going to guess that next.

I decided he needed to hear some advanced Star Wars music, so I put on Darth Vader at the Beach. It is a real song! (You can listen to it here. It’s by Marc Beaudin a local artist who plays regularly at my favorite restaurant, Sabor Divino) He liked the arrangement and laughed because he recognized the Imperial March within the relaxing strains of music. He declared ‘awesome’ on that arrangement.  At that moment is when the Rocky Mountains unfolded before us for the first time that day.

We knew we were close!

Trust me they get much bigger.

Soon we were past Hinton and approaching Jasper National Park’s gate, Hello and Welcome!/Bonjour et Bienvenue!

Then we discovered a couple of rebels on the road. They must be the family cats like I am. Marching to their own drummer because they did not heed the Wildlife Crossing signs. There they were out in the middle of the road ignoring everyone. 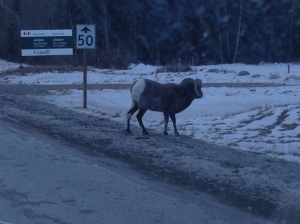 This is when I discovered my son’s life long dream. It has been on his bucket list FOREVER (he is 16, how long has he had a bucket list?). His dream is to touch water from a glacier fed river in the winter. For those of you not in the know, our rivers here in Alberta come from head waters of glaciers in the Rocky Mountains. Glaciers are moving rivers of ice either retreating or flowing. The rivers will freeze if they are not moving fast enough, however they are still flowing under the ice and it would be stupid for any mother to let her son crawl out onto the ice just to touch the blow freezing water. I did not want to be that mom on the news whose son drowned in the Athabasca River. That river claims enough lives in the summer. So I agreed. Whaaat? I know…with a caveat. He could not walk on the ice or snow to reach the water. His sister was not to pleased I agreed. She is a trained lifeguard and just thought I was the stupidest person alive. True… but I knew there was no way we would find those conditions in January. Therefor I am not as stupid as she thinks, and my son is happy that I agreed.

We drove towards the town-site of Jasper without finding the perfect spot to stop and fulfill his dream. We did meet his other wish of eating Pizza. After dinner we walked around checking out the town. and we saw kitschy window stuff. 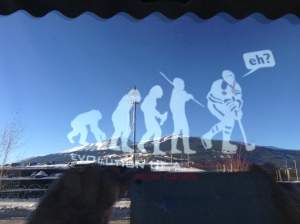 Ice Sculptures at the Sawridge 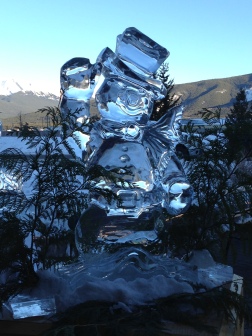 And Jasper’s answer to floral baskets

Soon we were heading down the bitterly cold street shivering, but I wanted to see the new Haida Totem.

That blue sky is why I put up with winter in Alberta.

We watched my boy do Cleese’s silly walk and then we headed back to the car to wrap ourselves in warm blankets, turn the heat on full and drive to Marmot Basin. The local Ski Hill – when I say hill – I mean Mountain. It looks small from the lodge but this is just the ski school and starter slopes. The chair takes you to slopes beyond amazing.

We looked over the edge to take a gander at the Tonquin Valley. It was surprising warm up there compared to the town-site. Perfect day for skiing! 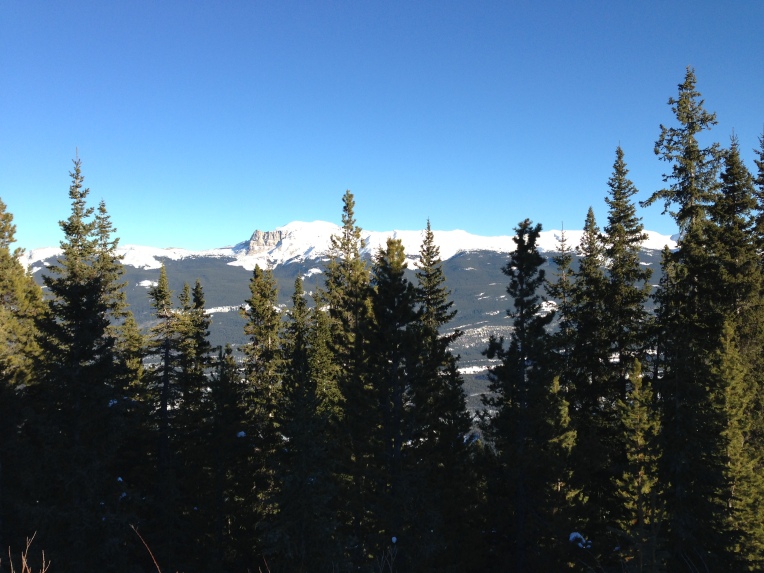 Then we headed for the Athabasca river where The Boy figured he could crawl out on his belly to reach his goal….um I don’t think so pal.

I had been here plenty of times in the summer and called out to the rafters to watch for rocks, the bend in the river, bears and other weird things to tease them. I knew how deadly this river is. There was no way I was letting my kid crawl out there. So we just looked. The snow here was amazing it was giant crystals the size of my thumb nail. The sun shone on them and they sparkled like diamonds. It was so beautiful!

Next stop Maligne Canyon. Holy Frozen Face Batman! It was the coldest here.

ChatterBox didn’t hike up to the falls with us. She was too cold, so after we climbed down to the canyon, she head back to the car for warmth. The funny thing about this canyon, the paths are steeper than the bunny hill at Marmot, the climb back up was was slick. Glad we had our all terrain boots on, yet snow still filled our knee high boots. It was deep at the canyon.

We were ready to head home. It was a long day and the mountain air makes you more tired than city air. This is a scenery we had to look at on the way out of the Rockies…I know, poor us.

Around this corner I saw the open plains of the valley with beach and no snow. Weird. I pulled over and let my boy finally fulfill his destiny.

As you can see, touching liquid ice is painful – but apparently worth it.